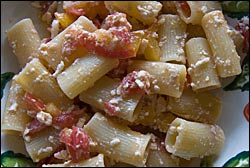 One of the main components of Cucina Povera is the utter simplicity of food that tastes of the seasonal wonders available locally.

Of course, you have to learn some basic cooking techniques to take advantage of Cucina Povera. So, what do you need to know to create what’s in the picture? You need to know how to boil water in a pot.

It’s summer, and fresh heirloom tomatoes are available. Normally, ricotta cheese is available only in spring, but ricotta salata, salted (thus preserved) ricotta is available now. It’s not expensive. Good olive oil is essential for this and other dishes that use it as a flavoring rather than a medium for frying.

Ok, so here’s what you do. Put your pot on the stove with abundant water, enough for the pasta you’re cooking. Salt the water (ideally you want it as salty as the sea). A big fistful is what I use for a big pot enough for a pound of pasta.

While you’re waiting, cut the tomatoes in half and squeeze the juice and seeds out of them. Chop them up and add them to a bowl big enough to hold all the pasta and ingredients. Season them with salt. (I peeled my tomatoes by dipping them in the pasta water for a minute, which loosens the skin and makes it easy to take off. Your choice.)

Boil up some big pasta, like the rigatoni shown in the picture. The groves hold the oil; that’s important. When the pasta is just done, drain it and add it to the bowl of squeezed tomatoes. Grate some ricotta salata into the bowl, then add a significant drizzle of olive oil.

Stir and you’re done. Unless you want some parsley in it which would give it the color of the Italian flag. Even some of that mint that’s taking over the back yard might be nice in this dish.

Facile, no? Quite easy; you didn’t even have to cook the sauce.

And if you want a real kick, use ricotta forte if you can find it. Strong ricotta is a traditional cheese made to taste almost like the celebrated Casu marzu of sardinia without the maggots. You don’t need much of it at all in this dish.

Endnotes: The recipe for Burnt Ricotta Salata, Tomatoes, and Olives sounds darned interesting. Ricotta Salata isn’t hard to make in your own kitchen, according to the Cheese Nerds